Today, we explored the road to Punta Olimpica, that goes northeast from Huaraz and throught the Huascaran National Park.

We did not start early today, because at the Huaraz high elevation the early morning can be very cold. As we drove north, we had incredible views of the Huascaran peak from the Santa valley.

The first part of the road

We started birding as soon as we left the agricultural valley and found good natural habitat. Our first two birds were a couple of endemics: Black Metaltail and Rusty-crowned Tit-spinetail. At that same spot we also had Andean Flicker, Mountain Caracara, Black-crested Tit-tyrant, and a couple of Black-throated and Rusty Flowerpiercers.

We arrived to the park rangers post at around 10:00 AM. After having signed the visitors book we walked a bit down the road, along a small creek. While walking we heard a Stripe-headed Antpitta calling, and Peruvian and Ash-breasted Sierra Fiches were almost everywhere.

Later, we were at about 12,500 feet, and we made another birding stop. The habitat here looked like the bottom of an ancient lake: grasses on a flat terrain, and a small river flowing along it. The edge of the valley was covered by large boulders, that looked to have been washed away by the glacier. The cool birds we found here were a large flock of Andean Flickers, and a Striated Earthcreeper flying among the bushes. We tried to get some pictures, but the birds didn’t allow us to get close enought.

As the road to Punta Olimpica got to higher habitats we had more chances for different birds. At around 15,000 feet we found our first mega bird of the day: the endemic Junín Canastero. At this same place we had great views of Puna Ground-tyrant and Plumbeous Sierra Finch.

A special mention for the magnificent landscapes along the road: 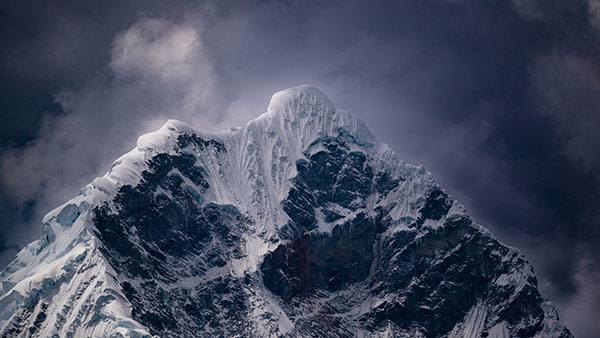 The highest point of the road is at 15,730 feet. There, the road goes across a tunnel, and enters the eastern slope of the mountains. On the easterns side we found another superbe bird: an Olivaceous Thornbill. This is a hummingbird restrictec to high elevations from Central Peru to northwest Bolivia. It’s a drab colored bird, but from the right angle, you can see the shining metallic colors of its throat.

We spent more than half an hour photographing the bird. I got as close as 4 feet away form the bird. The hummer was kind of sleepy, closing its eyes from time to time, so I was able to photograph that spectacular throat from a very close range.

It was around 03:00 PM when we decided to get back on the road to get to out hotel in Huaraz before dusk.

There were few bird species today, but those were super special: Junin Canastero, Olivaceous Thornbill, and some others. We end up the day happy and tired. After an early dinner and a few drinks, we went to bed early.

Tomorrow we will visit lake Llanganuco, a little piece of paradise not too far from Huaraz….. but that’s a story I save for tomorrow !!!

You can read the previous post of this trip report here: